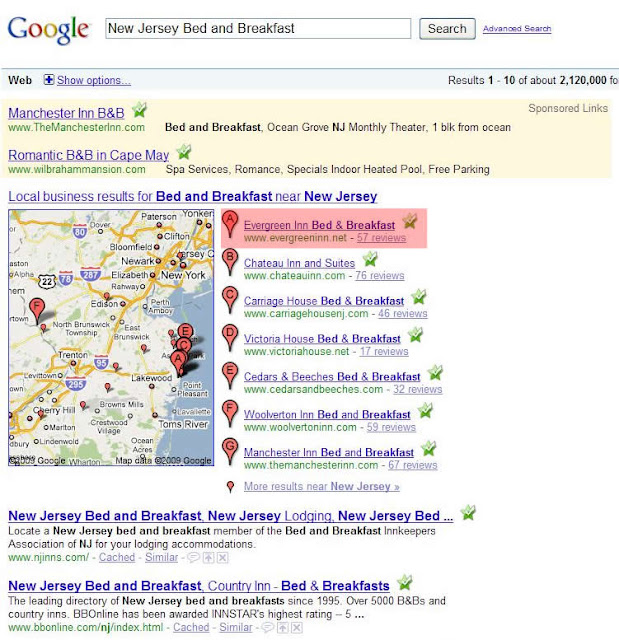 It's interesting that only 6 states show up for bed and breakfast phrases as a Local Business Listing in Google search (http://www.google.com/) but when you click over to Google Maps (maps.google.com) all 50 state bed and breakfast searches return results.  INTERESTING!

Question 2: Is it possible to get the highest possible Letter "A" placement for a state level phrase in maps.google.com if the property owners have NEVER CLAIMED THEIR LOCAL LISTING?

Even though all Google Local Business documentation says that to achieve highest possible level placement in Google Local and Google Maps the number one thing you MUST DO is to claim your listing, I find it VERY INTERESTING than on 24 of the following 50 states, the property in the highest possible Map Placement (Letter "A)  DID NOT CLAIM THEIR LISTING!

Check out Evergreen Inn Bed and Breakfast below from the New Jersey snapshot above.  They've never claimed their listing (see Red Shading).  And as you can see from the quote below, "Traditional SEO has little to do with Local Placement." The SEO company for this Bed and Breakfast cannot take credit for a listing that has never been claimed.  Keep Reading! 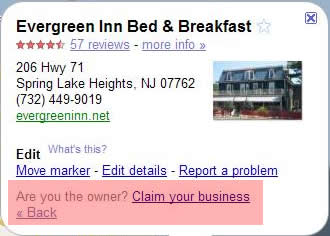 Steve Hatcher - "Other than the business website being recognized as the authoritative source of info about that business I don't see traditional organic SEO factors on that website having much influence on the local, non-organic, rankings."

Following is the research of all 50 States where the top Bed and Breakfast Listing has either been claimed or not!

Alabama – not claimed
(A-Listing: Cobb Lane – Acorn IS Customer, but there is no credit due to Acorn IS here, because this customer has not yet claimed their listing.  So even the great SEO we did organically for them had little to NO effect on this unclaimed Local Business listing.) 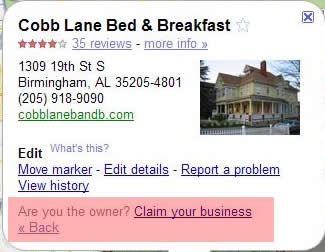 Mississippi – claimed
(A-Listing: Fairview Inn – Acorn IS Customer where this listing has been claimed and edited by Acorn IS.  And yes, indeed on this listing we are happy to take the credit for helping this inn place at the highest state level results in maps.google.com!) 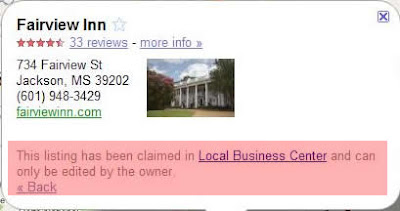 Will Google's Local Algorithms change in the future to give more weight to those Claimed Listings over those that are NOT claimed?  According to all we read, yes.  But we don't see it in action yet!  Stay tuned.

And if you want learn more, join us tomorrow on our FFA Industry WEBinar to talk even more about Google Local Placement, and it's current trends!